When Florence was an English town. The visits of Queen Victoria.

During her long reign, Queen Victoria (1819-1901) visited Florence three times, staying about a month each time. Desiring her holidays to be as private as possible, she rather ingenuously travelled under the name of the Countess of Balmoral. After crossing the English Channel on the royal yacht Victoria and Albert, she reached Cherbourg, where the royal train awaited her and her large entourage. When she travelled, Queen Victoria was accompanied by up to 80 people who occupied 13 carriages of her private train. These included members of her family, in particular, her youngest daughter and constant companion, Princess Beatrice (whom she called ‘Baby’) and her daughter’s long-suffering husband, Prince Henry of Battenberg; two ladies-in-waiting; her private secretary and her personal doctor; a Church of England minister (usually a bishop); her turban-wearing Indian Muslim attendant Abdul Karim, her great favourite, known as ‘the Munshi’; kilt-clad Scots guardsmen; and Indian servants. A firm believer in the comforts of home, the queen always sent ahead her carriages, especially her landau or her favourite four-wheeled carriage with a fold-back top, not unlike one of today’s convertibles; her bed; her green-leather-covered writing desk; and her crystal, china and cutlery from Windsor Castle, so they would be there waiting for her.

The sovereign was already 69 years old when she first came to Florence in March 1888. Her late arrival in Florence is a little surprising given that her beloved husband, Prince Albert of Saxe-Coburg and Gotha, had spent three months in the city the year before they married in 1840. A guest of Marchese Gerini at his palazzo in via Ricasoli, he was a frequent guest at the court of Grand Duke Leopold II and is said to have enjoyed his stay, yet the couple’s travels often took them to Prince Albert’s homeland. After his death, however, his widow frequently changed her vacation destinations on the continent.

On the royal visitor’s arrival at Santa Maria Novella station, she was met by a welcoming committee made up of the British ambassador, the Duke of Aosta representing the Italian king and queen, the mayor of Florence and members of the foreign community chosen by the British Consul General in Florence. Then, escorted by Carabinieri on horseback, the queen’s carriage drove through the streets, lined with crowds cheering and waving flags to the sound of bands playing the English national anthem. On reaching Villa Palmieri, her temporary abode, she was met at the gates by her hostess, the Countess of Crawford and Balcarres, and by the curator of the Palazzo Pitti galleries, Marchese Ridolfi, who would often, during her sojourns, be her guide around art galleries and churches. Once settled and after a light lunch, her first visit was to the Cascine, where she would return many times to savour the cool and soothing atmosphere of this unique place. She never seemed happier than when she was emerged in nature or sketching the city’s panorama from scenic points like piazzale Michelangelo or from the gardens of the many villas around town. However, according to her journals, the highlight of this trip came at Easter, when she watched the Scoppio del Carro in piazza Duomo from the comfort of the upper windows of the Loggia del Bigallo.

Five years later, in 1893, the queen returned to Florence, and once again was housed at Villa Palmieri. This holiday more or less replicated the earlier one with the exception of two special events. The first was the battle of the flowers, a procession of floral-decorated carriages that she, together with other invited guests, viewed from the balcony of Palazzo Medici Riccardi. The other was a train trip to San Gimignano.

The following year, Queen Victoria was again in Florence. Now 75, she was noticeably ageing, often using a bath (wheel) chair or a walking stick. All she wanted was to rest, although this did not mean that she lost touch with what was happening in her empire or that she failed to receive selected aristocratic or illustrious guests during any of her stays. This time, because of its closer vicinity to the centre of the city, she lodged at Villa Fabbricotti. She spent much of her visit drawing in nearby gardens, particularly at Villa Stibbert, which she explored in her open donkey cart. This was to be her last visit: later she preferred the sea breezes of the south of France. 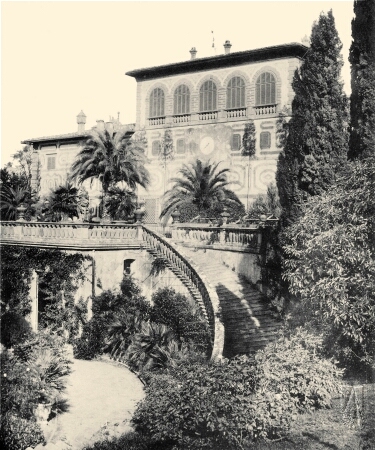 Up until very recently, had Her Royal Highness seen her fountain, she doubtless would have stamped her small regal foot in choler. The fountain itself is lovely: made of marble and standing on top of three concentric steps, the monument is divided into three separate basins, each with its own water jet. Over time, however, it has been isolated from the parkland by the incursion of roads and the tramway and, forgotten, it has been vandalised. Fortunately, the city now has plans to give it a brighter future by cleaning and restoring it and, perhaps, shifting it to the renewed Cascine, a task that is projected to cost 25,000 euro.