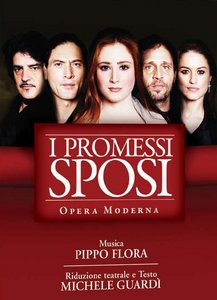 The 2011-2012 season of the Teatro Verdi of Florence is full of great events. From 24th to 26th February 2012 will be on stage “I Promessi Sposi – Opera moderna”, inspired by the famous novel of Alessandro Manzoni, directed by Michele Guardì and with the music of Pippo Flora.

“I Promessi Sposi- Opera moderna” are obtaining a great success, and reached the second edition, have been some changes to the cast and to the choreography. The choreography, completely renewed by Martino Muller, have donated more rhythm, dynamics and energy to the play.

The story of the play is been revisited in a modern key, halfway between the musical and the rock opera (Guardì speaks of modern opera in this meaning).

The two protagonists Renzo and Lucia are on the point of wedding, but are hampered by Don Rodrigo who wants take over of Lucia.

From here begin the misadventures of the betrothed, ma are forced to abandon the “village” where they live to hide away: Renzo in Milan and Lucia to the convent of Monza.

A large epidemic of plague strikes Renzo, that is able to cure unlike Don Rodrigo.

At the end Renzo and Lucia meet again at Milan, and here, at the light of the cathedral that triumphs the life, represented in the play by a final rain, to seal the victory of the life over the plague.

The play deals with the themes treated in the original novel with attractions to the current events, through an imposing set, projections and special effects, and shows how the social context is not different from now,  since we find again the same issues of the human being: from the love to the power, from the justice to the faith.

If you are not of Florence, but you don’t want to miss this play performed by great artistis like Lola Ponce, Giò Di Tonno, Christian Gravina, Christian Mini, Graziano Galàtonee e Vittorio Matteucci, stay on Florence and book a room in one of the hotels of the Ars Hotels chain.