Feast of St. Anne in Florence 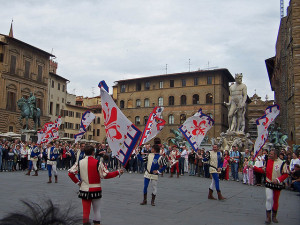 For the third consecutive year on July 26th 2011 the City of Florence celebrates the Feast of St. Anne.

The program provides at 20.30 a representation Parade of the Republic (100 listed) that will start from the palace of the Guelphs, and will head towards Piazza Signoria, where it will join the Gonfalone of Florence.

The procession will then proceed to the Cathedral, where candles will be delivered by the Florentine Madonnas, in homage to the relics of St. Anne. After the ceremony, the procession will head in Orsanmichele Giani where the commissioner will give a lecture on the history of St. Anne, in memory of the expulsion of the Athen’s leader, which occurred July 26th 1343, after a long year of tyranny suffered by Florentines.

From that year the July 26th became the day of the popular uprising of Florence: Saint Anne was proclaimed protector of the freedom of the city. The Signoria commissioned to put in a wooden altar in Orsanmichele to expose  “an image of St. Anne”: it was first painted in the late fourteenth century, then carved in wood.

The procession of the Feast of St. Anne will follow this path: the Guelph palace, Via Porta Rossa and Via Porta Santa Maria, Via Vacchereccia, Piazza Signoria, Via Calzaiuoli Cathedral. From the cathedral the procession will move along in Orsanmichele, via Calzaiuoli, Via degli Speziali, Piazza della Repubblica, Via Calimala.

Do not miss the opportunity to experience the wonderful atmosphere of Florence in feast: book your room in the city center with Ars Hotels.