On June 24th in Florence is the day of San Giovanni patron of the city, every year for this event there are different cultural and folk events (which culminate with the evocative fireworks or the “fochi di San Giovanni“, as the Florentines call them). The festival has ancient origins: once nobles and lords to celebrate the patron saint of Florence donated candles, with the growth of the power of the city and its lords then, the candles became more and more beautiful and rich and partly were intended for Baptistery, while the others were sold and the proceeds used for the Church. This custom is still in vogue today, in fact, on the morning of the 24th a procession of citizens accompanied by the high offices of the city goes to the baptistery to put candles where to receive them there will be the archbishop of Florence.

But the highlight of the day is definitely the final of “Calcio Storico”, a traditional Florentine game played since the sixteenth century with references to sports such as football, rugby and wrestling, this competition every year in June sees two of the four clash for the win teams representing the districts of the city: the Bianchi (whites) of Santo Spirito, the Rossi (reds) of Santa Maria Novella, the Verdi (greens) of San Giovanni and the Azzurri (blues) of Santa Croce, this year’s final will see the Verdi against Rossi. 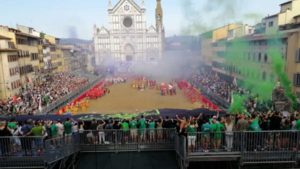 This great day of city festivity will conclude with the fascinating fireworks display, a play of light that reflects on the waters of the Arno, the fires are accessed from Piazzale Michelangelo to allow them to be seen also from the lungarni. 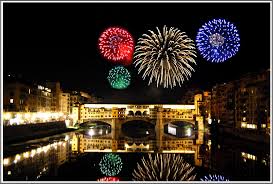