G3 in concert at Teatro Verdi

April in Florence is another rich month of concerts that opens with an absolute spectacle, on April 3, in fact at the Teatro Verdi will be the scene three great exponents of the world rock and sacred Monsters of the electric guitar, Joe Satriani, John Petrucci (Dream Theater) e Uli Jon Roth (ex Scorpion). 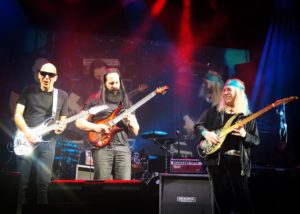 The G3 (guitar three) is a project wanted and founded by Joe Satriani in 1996 that brings together the best contemporary guitarists on a tour with almost yearly cadence and that each time sees alternating the various artists alongside of Satriani. This show will consist of a 4-hour performance in which the three artists will sing individually on stage and then close with a great collective final jam re-screening some of the greatest hits in the history of rock.