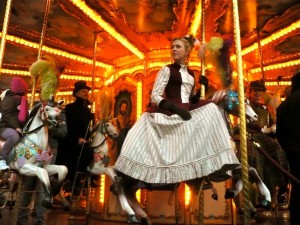 Today start officially the celebrations for 150° anniversary of Florence as Capital City of Italy with an event that introduce to 5 years of events to celebrate this important appointment. The most curious event, that will catch everybody’s attention, it will be held on Saturday 7th February through the city centre’s streets: the historic promenade with all dressed in nineteenth-century attire.

3rd February 1865 king Vittorio Emanuele II arrived in Florence, this is the news of the weekas it will be proposed today in Palazzo Vecchio by the Major Dario Nardella and the President of Celebrations Commitee Eugenio Giani.

The event that introduce to 5 years of events and celebration starts from Salone dei Cinquecento,  introduttivo ai cinque anni di eventi e festeggiamenti parte dal Salone dei Cinquecento, a sober programm with the participation of Cherubini’s Conservatory learners, the Major of Turin Fassino, the Vicepresident of Tuscany Region Saccardi, with an introduction of historian and writer Valerio Massimo Manfredi together with Toni Servillo. The evening will continue in the new Opera House of Florence  with a big concert of the Risorgimento.

The most curious event will be for sure the Promenade organized byAtelier de Danse  and the cultural association PRIMA,  a walking through the most important streets of the city centre on Saturday 7th February. 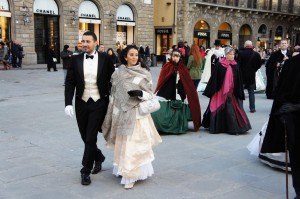 From a Donald Francis’s idea, this i’s not the first time he is going to organize such an event, his appointments are always very appreciated by the small but refined groups of old dances fans, infact the promenade will be followed on Sunday by a lively ball to the tune of most beautiful waltz

On Saturday the Promenade will stop at Torre della Castagna, seat of  Garibaldini’s Association, here the citizien will met the nineteenth-century dressed up people with a group dressed with the typical uniform in red shirt.

A dive into the past, for the pleasure of tourists and curious people, that cannot let escape this particular procession.

All can attend to the Promenade, the appointment is  Saturday 7th February earlier than 4.00 pm at the Atelier de Danse: via Sant’Egidio n.10 Florence, in order to get changed and to start walking.