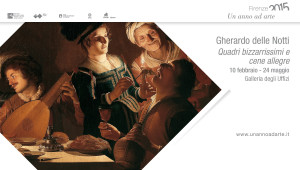 During 2015 the project  “Un anno d’arte” (A year dedicated to art) continues: also this year a rich calendar of exhibitions and shows with an historical and artistic character will lead tourists and visitors between the more impressive spaces of Florence, confirming our city as an unmissable appointment with art, culture and beauty.

2015 is an important year for Florence, as 2 anniversaries will be celebrated: 150 years of Florence as Capital City of unified Italy  and  150th year of constitution of Bargello’s National Museum.The Gallery of Modern Art honour the event with the exhibition  “Firenze Capitale 1865-2015. I doni e le collezioni del Re” (Florence Capital City 1865-2015. The King’s presents and collections)  from 19th November to 3rd April 2016, whereas from 20th March the Bargello’s Museum will host “Il Medioevo in viaggio”, a collection put together thanks to contacts and partnership with other similar museums in Europe.

Always from Middleage starts the exhibition that will take place at the Gallery of Fine Art, named “L’arte di Francesco. Capolavori d’arte e terre d’Asia dal XIII al XV secolo” (Francesco’s Art. Art masterpieces and asian territory from 13th to 15th Cent.) from 30th March to 11th October: an itinerary that leads to the discovery of Franciscan order origins, one of biggest religious and cultural event of this age. In the end, the Argenti Museum will host the exhibition  “Lapislazzuli. Magia del blu” (Lapis lazuli. Blue’s Magic) from 9th June to 11th October, a theme that cross centuries and has the aim to prove the passion for this precious material from its origin untill today.