The strange history of Orsanmichele 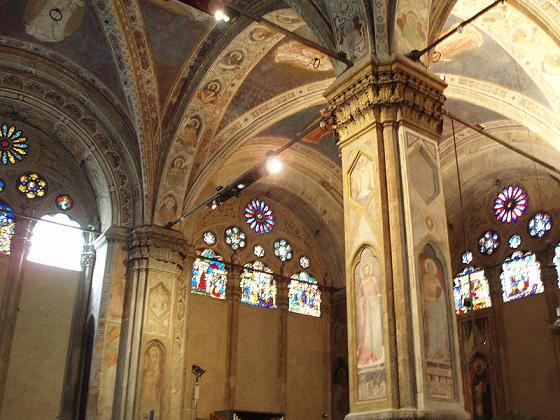 The story of Orsanmichele begins in 1240, with the Florentine Commune ordering the destruction of a small, 500-year-old church called San Michele in Orto (St. Michael in the Garden), known more fondly as Or San Michele. The newly gained public space was intended to provide the expanding town with a grain and cereal market.

Within 40 years, the construction of a loggia was begun, allowing the market to carry out its commercial activities, come rain or shine. An image of the Archangel Michael was painted on one of the brick pillars, and a depiction of the Madonna on another. Miracles commenced almost before the plaster of the fresco of the Virgin Mary was dry. Many grateful beneficiaries of the Madonna’s grace left offerings, which soon became so numerous that a committee of eight captains of Or San Michele was required to distribute the gifts to those most in need. 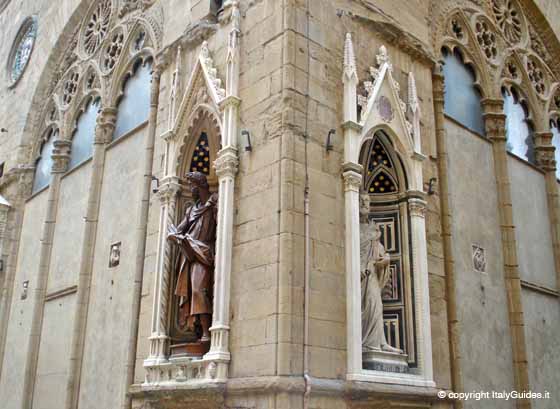 In the fourteenth century, the Italian peninsula was plagued by intense localised warfare. Cities and towns constantly faced the prospect of being sacked and besieged. In the event of a siege, it was vital that trapped citizens had access to a grain store large enough to feed everyone for an indefinite period of time. It soon became evident that Florence needed a granary inside its walled perimeter—the question was where to put such a large structure. On July 10, 1304 a calamitous fire left the loggia in charred ruins, and the miraculous image of the Madonna was consumed in the flames—a complete disaster for the captains of Or San Michele.

The runaway economic success of Florence through the wool industry and the growth of banking and merchant houses enabled the Comune to replace the loggia, build a secure granary and honour to the Madonna without using one florin of public funds. This financial wizardry was achieved by allocating one pillar of the new loggia to each of the city’s 21 guilds, thus giving rise to the one of the world’s first acts of corporate sponsorship. Above the market, supported by massive stone pillars, would be two floors for grain storage. 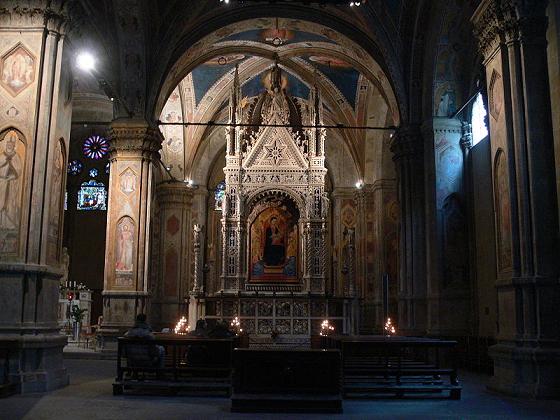 And of course, the Madonna was not forgotten by the city. A tabernacle made of stone, marble and bronze was constructed to enclose a painting of the Madonna delle Grazie by Bernardo Daddi. The massive, ornate tabernacle depicting scenes from the life of the Virgin Mary was held together with bars of leaded copper rather than mortar, giving the impression that the tabernacle was carved from a single piece of marble. It took Andrea di Cione, an Italian painter, sculptor and architect known as Orcagna (c. 1308–c. 1368), 10 years to complete this remarkable masterpiece. 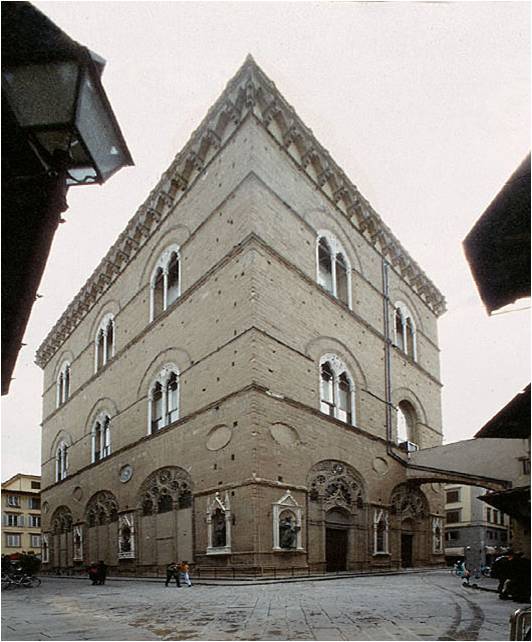 However, the sheer beauty and power of Orcagna’s work meant that the mundane bustle of the grain merchants had to go. The departure of the trading floor allowed for the bricking up of the spaces between the outer pillars of the loggia, while the upper two floors remained granaries until the sixteenth century. Because the 10 external pillars of the building provided 14 niches (two on each corner, and one on each of the remaining six pillars), the leading guilds commissioned sculptures of the patron saints of their respective guilds. This was how the citizens of Florence were given an open-air art gallery containing works by the likes of Donatello, Ghiberti, Giambologna, Baccio, and many others.