The Medici coats of arms

If you walk in Florence you will notice a coat of arms with six balls. This is the coat of arms of Medici family that has always been associated with balls. Their family emblem, five red balls, and one blue, on a gold shield, decorate numerous buildings all over Florence and Tuscany.

The origins of this coat of arms are shrouded in mystery and have been the object of much speculation through the centuries. Probably  they represent pharmaceutical pills, or possibly cupping glasses (a late-medieval medical instrument used to draw blood), recalling the possible origins of the Medici as doctors (the Italian word for ‘doctors’ is medici). However, many people claim that this story was in fact invented at the French court in the sixteenth century in order to slander Queen Caterina de’ Medici by reminding the people of her humble origins. 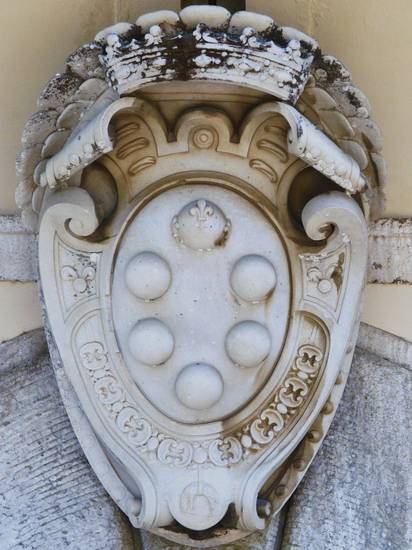 The balls are also sometimes said to be bitter red oranges, alluding to the trade the Medici family conducted with the East. Others believe the balls are bezants, Byzantine coins, copied from the coat of arms of the Guild of Moneychangers (Arte del Cambio) to which the Medici belonged. Family members occasionally used different numbers of balls; evidence of this can be still be seen around Florence: San Lorenzo’s Old Sacristy contains both a shield with seven balls, while another on the ceiling has eight, and Cosimo I’s tomb in the Cappelle Medicee displays only five.

King Louis XI of France, with a decree issued in Montlucon in May 1465, granted to Piero the Gouty and his heirs and successors legitimate use of the lilies of France on a blue background, introducing the ball in the top of the coat of arms. 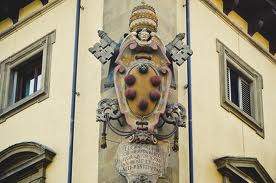 The translation of balls is in italian “palle”, and  their rallying cry in times of war was “palle, palle, palle!” One of the most beautiful coats of arms of the Medici  family in Florence  is in the corner of Palazzo Pucci, the coat of arms of Pope Leone X and attributed to the sculptor Baccio da Montelupo.