Santa Maria Novella and the Great Cloister, the extraordinary opening of Saturday, March 8

Near Hotel Rivoli and Best Western Grand Hotel Adriatico there is the Church of Santa Maria Novella might not be at the top of your list of places to visit in Florence but we highly recommend you place it on there. Architecturally, it is one of the most important Gothic churches in Tuscany. The exterior is the work of Fra Jacopo Talenti and Leon Battista Alberti. The interior holds extraordinary works of art including Masaccio’s Trinità,Ghirlandaio’s fresco cycle in the Tornabuoni Chapel and Giotto’s Crucifix, among others.

The convent was built between 1279 and 1357 by Dominican friars near a 7th century church located in the fields just outside Florence’s medieval walls. The lower part of the marble facade, which is Romanesque in style, is believed to have been executed by a Dominican architect, Fra Iacopo Talenti da Nipozzano, while the upper part was completed only 100 years later in 1470 by Leon Battista Alberti. Thus, the facade is not only the oldest of all the churches in Florence but it is also the only church with its original, planned facade still in place today! As you will see, the church of San Lorenzo never even received its planned marble facade while others were completed centuries later… but with new designs.

The magnificent Grand Cloister, has been home to the school of Marescialli and Brigadiers of the Carabinieri since 1920, and as such is closed to the public. The Grand Cloister of Santa Maria Novella is called that precisely because it is quite large, with 56 arcades surrounding the internal courtyard corridor. Along one end, it sides with the famous Santa Maria Novella Pharmaceutical and Perfume Laboratory whose entrance is on Via della Scala and on its east side with the Refectory of the Santa Maria Novella museum complex.

Built between 1340 and 1360 and hosted along three of its four sides dormitories for the friars living here. Two centuries later, two noble Florentine families and the Grand Duke Cosimo I de’ Medici financed the decorations of all of the walls with frescoes of the life of St. Domenic and other Dominican saints, scenes from the life of Christ (at the corners) and portraits of important members of the Santa Maria Novella community (on the pilars). The fresco cycle was largely painted within 1570 and 1590 by over 15 various artists from the Accademia known for similar collective works, such as Alessandro Allori,Santi di Tito and Poccetti. The size, iconography  and clear narrative style of the scenes make it one of the most representative of the Counter-reformation. 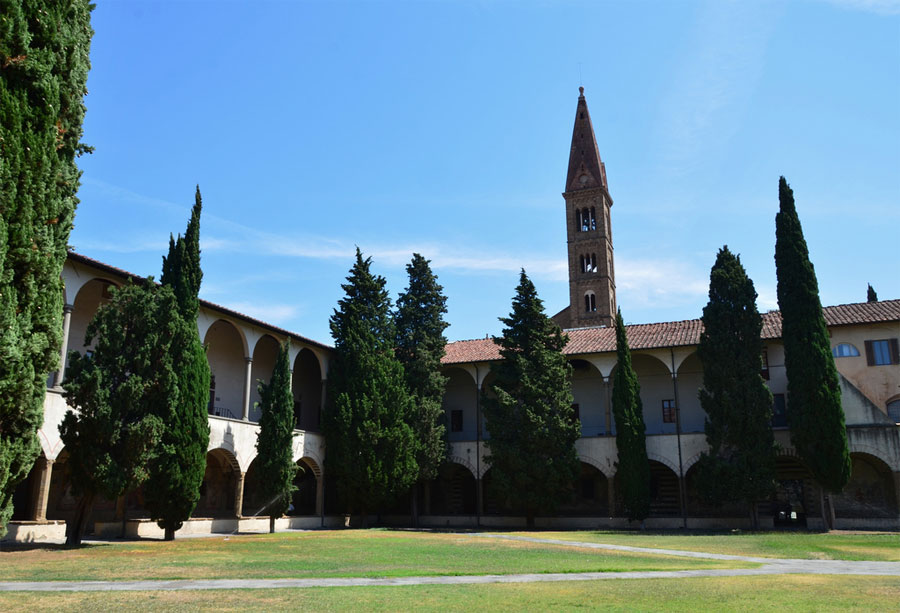