Florence meets Rugby with the test-match Australia vs Italy 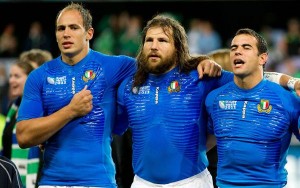 A few days and an unmissable event is going to take place in the city of Florence: on November 24th the Italian Rugby Team will play against Australia. The competition is set in the Artemio Franchi Stadium, the same place where on November 2010 Italy had already challenged the Wallabies in front of 30,000 spectators!  An international challenge, a test-match between a pretty new team (Italy entered in international competitions only twelve years ago) and a team in second position in the world rankings, surpassed only by the fearsome New Zealand rugby players (Australia).

The Italian Team, founded in 1929 under the jurisdiction of the Italian Rugby Federation, is currently involved in the Six Nations Championship, a European challenge that involves France, Wales, Scotland, England, Ireland and the players in blue t-shirt (Italy).  Not many people know the “symbolic” awards related to these meetings. In particular, the latest graded in competitions can receive the Wooden Spoon or the Whitewash. The wooden spoon is awarded to the team who finishes at the bottom of the table in the RBS 6 Nations, while the Whitewash is metaphorically attributed to the team who win no games at all.

Rugby matches are usually played with 15 players but for the match against Australia, Italy will also need the sixteenth man in the field. This challenge is a really must-see event for fans but also for those approaching the sport of rugby for the first time.

Take advantage of the competition by visiting the city of Florence and stay with your flags in one of the Ars Hotels at your disposal.