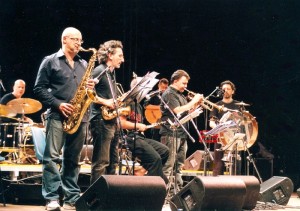 Italy is handling a crisis, bus this has not stopped the great solidarity towards the poorest countries.

The Odeon cinema in collaborazione with the Jazz Band Les Italiens has decide to organize a charity performance for the people of Tanzania, thursday 7th February 2012 at the Odeon of Florence, offering the proceeds to the Jade Goodall Italy organization.

The Jade Goodall Institute for Men, Animals and Enviromentis is a non-profit organization that operates in 26 countries in the world, including Tanzania, where he built a house village for children in Kigoma, that lodges orphans and street children.
The goals of the Jade Goodall Italy are to reduce deprivation in one of the poorest country of the world and improve the living conditions of children orphaned also by AIDS that kills over 100.000 people in Tanzania every year.
Les Italiens, jazz band founded in 1998 by Alessandro di Puccio and constituted by international musicians, and the Odeon cinema have joined in this project, organizing a charity event with a concert of meditteranean swing.
This event will be the fist of many events dedicated to the solidarity in the International Year of Cooperatives organized by the United Nations and the whole proceeds of the ticket will be gave to charity.
Ars Hotels chain joins to charity and invites you to attend to the concert and to contribute to help people less fortunate.
For more information visit the site of Odeon cinema.
Share