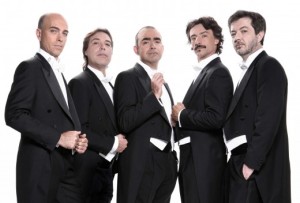 With the new year starts the theater tour of Elio e le Storie Tese that will be at Teatro Verdi in Florence the 2th February 2012.

Enlarge you penis, this is the name of the tour that already promises to be full of surprise and special effects. The set list of the concert is strictly top-secret right to leave that air of mistery and unpredictability that has always characterized the band of Elio e le Storie Tese.

Born in Milano in the 80’s, Elio e le Storie Tese are made known to the general public especially in the 90’s with the participation at Sanremo, where came second with the song “La terra dei cachi” (Land of persimmons), that was much different from the classic themes of Sanremo, talking about problems with mafia, corruption and health in Italy.

Sanremo’s event was just one of many episodes of sarcasm and irreverence that characterized the group of Elio. Since the debut the Elii distinguish themselves for their humor and their sharp humor.

From their lyrics, the remake of lyrics of other artists, their television collaboration, like the one with the Gialappa’s Band at “Mai dire gol” (Never say goal), everything  is focused on their natural eclecticism and their desire to be a mould-breaker.

A group, Elio e le Storie Tese that may be controversial for the topics treated, but certainly communicative impact. This concert can be an unusual and original way to spend an evening, with Elio and his companions, and if you are not of Florence, but do not want to miss this event take the opportunity to spend a long weekend in the city and book a room in one of the hotels of Ars Hotel’s chain.

For more information about the concert and the ticket sales visit the site of the Teatro Verdi.