At the Teatro Verdi in Florence another great classic of Tchaikovsky: “Swan Lake” 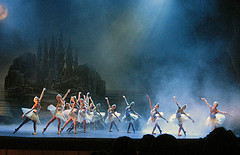 After  “The Nutcraker” the Teatro Verdi in Florence presents another ballet with the music of Tchaikovsky “Swan lake” on stage the 22th January 2012.

This is the first of 3 ballets of Tchaikovsky and the most famous. Ordered in 1875 to Tchaikovsky, was performed for the first time in Moscow in 1877 and it was much criticized.  It was withdrawn from the stage after few repeats also because the music was too revolutionary. Only in 1895, thanks to a new choreography it managed to achieve success.

Swan Lake will be presented in Florence by the Russian Classical Theatre and is divided into four acts and four scenes. Although there are many versions of the ballet, most ballet companies based their choreography and music on the revival of Marius Pepita and Lev Ivanov for the Imperial Ballet, staged for the first time on January 1895 in St. Petersburg.

It’s a romantic story with dramatic strain that tells about a prince (Siegfried) that falls for a girl (Odette), transformed into a swan for a spell.

The two lovers meet during the night at the swan lake, when Odette and the other swans take human form, and dance together.

Odette tells Siegfried that only a  promise of marriage made at the point of death will break the spell.

The next day the prince must choose his future wife, and so the magician that has inflicted the spell has made his daughter Odile identical to Odette. Siegfried mistakes her for Odette and proclaims to the court that he intends to make her his wife.
Soon after he discovered the deception, the prince runs to Odette, dying, and in an attempt to save her from the waters the two lovers are swallowed by the lake.

It’s a cultural event that you don’t miss, an ageless tale that meet always a great success of public; so if you are not of Florence but you want attend at one of the most beautiful ballets off all the times, come in the Tuscan capital and reserve a room in a hotel of Ars Hotels’ chain.

For more information about the ballet and tickets visit the site of Teatro Verdi.