Negramaro: “Casa 69 Tour” at the Mandela Forum in Florence 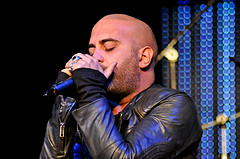 In Octorber 2011, Sunday 30th and Monday  31th on stage at the Mandela Forum in Florenze will perform the Negramaro.

Planned for April 2011, the two concert dates in Florence were postponed because the leader of the group, Giuliano Sangiorgi, had to do a sudden intervention to the vocal cords.

With “Casa 69 Tour” (House 69 Tour), already sold out in many Italian cities, Negramaro came back live after two years since the historic concert at the San Siro Stadium in Milan. The huge request of tickets has made duplicate and in some cases triplicate the dates of their tour in almost all stages.

Negramaro, since years, have become one of the band most popular and appreciated in the music scene.

Affirmed themselves with their second CD, “Mentre tutto scorre” (while everything flows), from which they extracted the single of the same name, and thanks to which they remained for 20 consecutive weeks at the top of the best single charts in Italy, continues to enjoy success both in music and cinema.

In fact, they have already participated at various collaborations with the world of cinema. The Negramaro signed the soundtrack of acclaimed films such as “Cemento armato“(reinforced concrete) (2007), where Giuliano Sangiorgi duet with Dolores O’Riordan in “Senza fiato” (breathless) or the more recent “Vallanzasca – Gli angeli del male” (Vallanzasca – The angels of devil) (2010 ), a film directed by Michele Placido.

To buy Negramaro’s ticket go on TicketOne and if you plan to stay in Florence, book a room in one of the hotels Ars Hotels.

Prices of the concert: