Feast of “Rificolona” in Florence 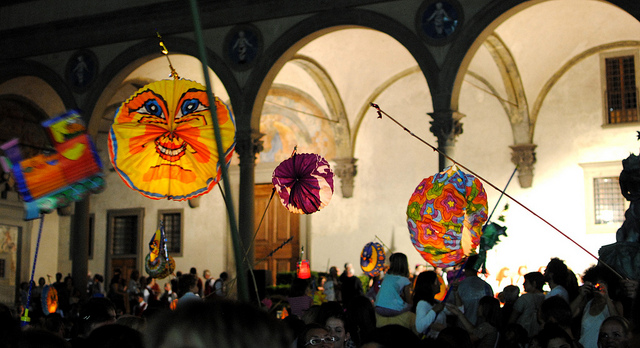 On 7th and 8th September 2011 Florence will host the traditional Feast of the Rificolona, ​​one of the manifestations of folklore passed down among the young Florentine to carry around colored paper lanterns, from the most varied and bizarre hanging on top of a cane.

The origins of the Rificolona dating from the mid seventeenth century, when on September 7 farmers came to town to celebrate the Nativity of Our Lady and to sell their products on the square in front of the Basilica of the Santissima Annunziata. During the night the farmers cleared the way with lanterns of various shapes hanging from the top of the barrel or poles: the so-called “rificolone”.

At night the pilgrims, however, were unable to sleep for the noise made by groups of young people who poured into the square. The female farmers, especially, were the target of ridicule by the young Florentine.

Then, as if to underline this funny habit, for the appointment of 7 September in Florence began to build lanterns inspired by the forms of farming, which were hung with long rods and carried out with great noise.

Even today the party continues and colorful lanterns hung you can still see a little everywhere, the windows of buildings, in public housing, along the river and on the streets of Florence. Of the remaining party is also the “market” means Fierucola of Bread, which since 1984 has it in Piazza SS. Annunziata the first weekend of September.

The program of the Feast of Rificolona

Rificolona in the Arno – Allegories of paper mache boats lit by paper lanterns and award the most original rificolona.

Enjoy the traditional Feast of the Rificolona planning a holiday in Florence: book your room with Ars Hotels Firenze.